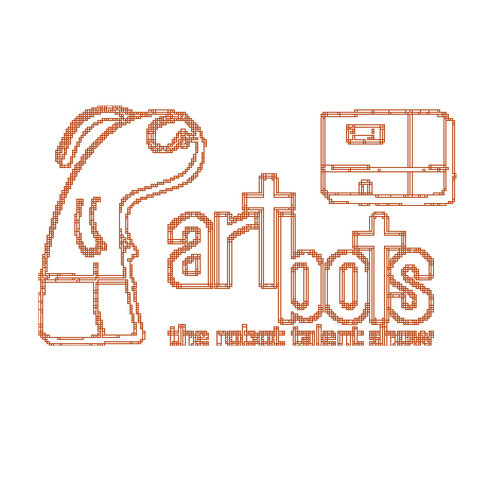 ArtBots was a series of international exhibitions featuring robotic art and art-making robots. It was founded and co-curated by Douglas Repetto.

For each show, we publish an open call for submissions, inviting artists from around the world to send us information about their work. We have no fixed definition of what qualifies for the show; if you think it's a robot and you think it's art, we encourage you to submit. The final list of participants is a mix of works selected from the open call submissions and additional artists invited by the ArtBots curators.

Every year the show is a bit different; the location changes and ArtBots director Douglas Repetto invites a new set of humans to co-curate the show with him. We hope that by changing the specifics of the show each year we can keep it accessible to a diverse range of people, works, and ideas.

The 2011 ArtBots show took place October 6-8, 2011, in Gent, Belgium. It featured the work of 10 international artists as well as research presentations and a robot orchestra concert!

The 2008 ArtBots show took place September 19-21, 2008, at Science Gallery at Trinity College in Dublin, Ireland. The show featured 15 works by 16 artists from 9 countries, as well as performances, workshops, lectures, and an awards ceremony. Participating works were selected from an international open call for "robotic art and art-making robots", and represent a broad and inclusive cross-section of the tremendous range of creative art and robotics activity.

We were very happy to do a regional NYC show at Location One as part of the science+art festival 2006 on November 9-12 2006. The show featured works old and new by eight New York artists who have appeared in previous ArtBots events.

The Parc d'aventures scientifiques (PASS) science museum in Belgium put on a robotics show in April 2006 that featured a number of works from previous ArtBots shows!
http://www.pass.be/fr/ev_nements/robots/les_installations.shtml

The fourth ArtBots show took place on July 15, 16, 17 at Saints Michael and John Church in Dublin, Ireland. It was a terrific show, with 21 works selected from a large and diverse pool of entries submitted by artists from around the world. Over 1650 visitors attended the three day exhibition!

The third ArtBots show took place in September 2004 at The Mink Building in Harlem. It was a terrific success, with 20 works by artists from seven countries, thousands of excited visitors (including countless kids!) from all over the city and the world, and wide media coverage.

In March 2004 International Artexpo invited ArtBots to be a special guest at Artexpo 2004 in New York. Seven of the artists from the 2003 show brought their work to the Javits Center for the five day event.

The second annual international ArtBots: The Robot Talent Show took place at EYEBEAM Gallery in New York City on July 12-13, 2003. The show featured the work of 22 artists and groups from six countries. Thanks to the work of very many kind and talented people from around the world the show was a great success. We had well over 2000 visitors, as well as local, national, and international press coverage in print, television, and on the web.

The first ArtBots show took place in May, 2002, and included the work of ten artists and groups. Nearly six hundred people visited the show during its one day run, and the show received very positive coverage in many print and online publications in the USA and internationally, including The New York Times, TimeOutNY, BoingBoing.net, and the NASA's Cool Robot of the Week site.