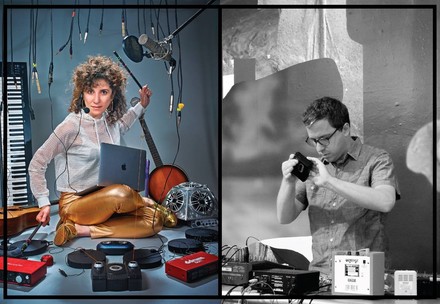 Wednesday, December 5th, ISSUE is pleased to present composers Lainie Fefferman and Seth Cluett each premiering new works recently developed in collaboration with Nokia Bell Labs. Both artists employ specific strategies designed through active research with Nokia Bell Labs engineers and studios, evoking Experiments in Arts and Technology’s profound history of collaboration and shared dialogue between artists and engineers to expand artistic expression and technical innovation. The result has been the development of new performance practices, including a multichannel live-streaming network applied in Fefferman’s White Fire, as well as 3D-printed acoustic modifications and the interactive use of transducers found in Cluett’s work.

Lainie Fefferman premieres "White Fire," a feminist meditation on her Jewish heritage through processed vocals and live electronics. "White Fire" presents songs centered around the female figures of the Hebrew Bible in Fefferman’s own imagining of their respective voices and first-person experiences within the iconic stories of the Judeo-Christian-Muslim tradition. Fefferman has remarked that she has been thinking about ways of re-owning foundational Jewish texts in her work for some time -- attempting to give a powerful voice to these matriarchs and heroines that are often sidelined in the biblical narrative.

Performing these songs as a one-woman electroacoustic band, the tools and technology used to illuminate these varied figures includes live vocal processing and vocoding, sampling and synthesizing, homemade MIDI trigger controllers, and a new multichannel live-streaming network that Fefferman has been developing for the past year, with ISSUE’s support, in collaboration with engineers and researchers at NOKIA Bell Labs. The network employs the personal devices of audience members as spatialized audio channels, creating intimacy within the epic nature of these texts. NOKIA Bell Labs developed this bespoke technology, entitled “Compositions for the Collective,” enabling Fefferman to extend her performance by turning audience members’ cell phones into loudspeakers.

Seth Cluett presents the New York premieres of "The Deformation of Figures," performed by Tim Feeney, and "Between Truly Equal Beings," performed by Morgan Evans-Weiler. The two works are part of a series of pieces where modifications to acoustic instruments using transducers and 3D-printing alter the normal relationship between the performer and their instrument. These pieces are not a didactic power struggle between humans and technology, but rather take the form of a dialogue where the expected physical response of the instrument paired with technology offers enough resistance to suggest new modes of interaction, enable a heightened attention to detail, or offer a widening of the palette of sounds available.

Exploring the personal and idiosyncratic aspects of music-making, composer Lainie Fefferman’s most recent commissions have been from So Percussion, Make Music NY, Experiments in Opera, ETHEL, Kathleen Supové, TILT Brass, James Moore, Eleonore Oppenheim, JACK Quartet, and Dither. Her recent evening-length piece “Here I Am” for Newspeak and Va Vocals, the culmination of her residency at Roulette through the Jerome Foundation for the 2013-2014 season, was warmly received by a sold-out audience. In the 2015/2016 season, she was a resident fellow at the HERE Arts Center, where she created a multimedia performance art piece based on mathematical categorizations of infinity for herself and Mantra Percussion. She was LABA fellow at the 14th Street Y for the 2015/2016 season, which culminated in an initial workshop performance of an upcoming evening-length multimedia piece for the JACK Quartet with animations by Patrick Pohl and film by Stephen Taylor based on the graphic novel "Market Day" by James Sturm. Fefferman is the co-founder and co-director of Exapno, a New Music Community Center in Downtown Brooklyn and is co-founder and co-organizer of the New Music Gathering, an annual national new music event. She received her doctorate in composition from Princeton University and continues to be a performing member of Princeton-based laptop ensemble Sideband. She taught composition at Mannes Conservatory and mathematics at Saint Ann's School. She joined the faculty of Music & Technology at Stevens Institute of Technology in the fall of 2017.

Seth Cluett is a composer and visual artist who creates work that explores everyday actions at extreme magnification, examines minutae by amplifying impossible tasks, and tries to understand the working of memory in forms that rethink the role of the senses in an increasingly technologized society. Ranging from photography and drawing to installation, concert music, and critical writing, his “subtle…seductive, immersive” (Artforum) sound work has been characterized as “rigorously focused and full of detail” (e/i) and “dramatic, powerful, and at one with nature” (The Wire). The recipient of grants from Foundation for Contemporary Arts Emergency Fund and Meet the Composer, his work has been presented internationally at venues such as The Whitney Museum, MoMA/PS1, Moving Image Art Fair, CONTEXT Art Miami, GRM, and STEIM. His concert work has been commissioned by ensembles ranging from the Hong Kong Sinfonietta and the International Contemporary Ensemble to So Percussion, Catch Guitar Quartet, and Clogs and is documented on Line, Sedimental, Notice, and Winds Measure recordings. Cluett is the Acting Director of the Computer Music Center and Assistant Director of the Sound Art Program at Columbia University and is Artist-in-Residence with Experiments in Art and Technology at NOKIA Bell Labs where he maintains a studio and is active in research on virtual and augmented reality acoustics and multi-sensory communication.

Improviser, composer, and interpreter Tim Feeney seeks to explore and examine the possibilities inherent in unstable sound and duration. He frequently collaborates with improvising artists including the trio Meridian, with percussionists Sarah Hennies and Greg Stuart, pianist Annie Lewandowski, cellist/electronic musician Vic Rawlings, saxophonist Andrew Raffo Dewar, banjo and electronic musician Holland Hopson, and many others. Within this community, he has recorded for the experimental Caduc, Accidie, Rhizome.s, Full Spectrum, Sedimental, homophoni, Audiobot, Soul on Rice, lildiscs, and Brassland/Talitres labels. Most recently, he has performed in quartet and large ensembles with composer and saxophonist Anthony Braxton, including a performance at the 2016 Big Ears Festival, in Knoxville, Tennessee. This fall, Feeney joined the faculty at Cal Arts after leading the percussion studio at the University of Alabama and directing the percussion program at Cornell University.

Morgan Evans-Weiler maintains a busy performance schedule and has performed throughout the U.S. He has collaborated and performed with Seth Cluett, Sarah Hennies, Mike Bullock, Dave Gross, Ryoko Akama, Jed Speare, Magnus Granberg, Christoph Schiller and many others. He is director of the New England based ensemble ‘Ordinary Affects’ whom have performed works by Eva-Maria Houben, Magnus Granberg and premiered works by Jürg Frey, Antoine Beuger and Michael Pisaro. He recently presented his work in London, Berlin, Huddersfield, Nantes, Besançon and completed a ten day residency at Elektronmusikstudion in Stockholm. In 2014 he was invited to perform at the High Zero Festival of Experimental Improvised Music. His album ‘Violin/Sine’ was called ‘transfixing’ by writer Steve Smith and included in the Boston Globe’s list of ‘Best Local Classical Albums of 2015’. Chicago writer, Peter Margasak, writes “the degree of focus and the richness of Evans-Weiler’s sound-worlds are nothing short of astonishing” about the recent recording ‘Unfinished Variations (for Jed Speare)’. His music has been released on the ‘Suppedaneum’, ‘Another Timbre’ and Weigher’ recording labels and he has forthcoming releases on ‘Rhizome’ and ‘ErstAEU’.

This presentation of new work by Lainie Fefferman and Seth Cluett is proudly supported by NOKIA Bell Labs.

ISSUE Project Room and the artists would like to thank Howard Huang, Danielle McPhatter and Madeline Wong for their contributions and support of Lainie Fefferman’s "White Fire."