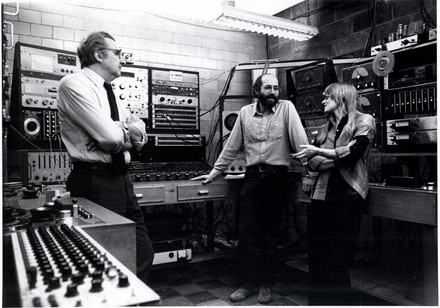 The Computer Music Center at Columbia University is an innovative and exciting music and arts technology facility with a long history of creative excellence. The center is housed in two separate facilities: one in Dodge Hall on the main Columbia campus (1 train to 116th St.), and another, larger facility on the third floor of Prentis Hall at 632 W 125th St. (1 train to 125th St.).

There are many opportunities for involvement in CMC activities. Students, researchers and creative artists working at the Center come from many different divisions within Columbia University. The primary mission of the CMC is to operate at the intersection of musical expression and technological development, and as a result the Center has become involved in a broad range of interesting projects. The CMC has also produced events aimed at reaching out to a wider community, both locally in New York and globally in a number of different international venues.

The CMC’s classes are open to qualified undergraduate and graduate students in all departments of the University. In addition, a number of guest composers and researchers have come to the CMC from all over the world to take advantage of our unique expertise and facilities. 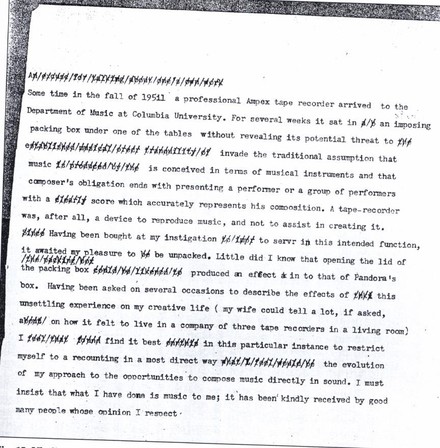 Vladimir Ussachevsky's typescript notes on the arrival of the Ampex 400 tape recorder.

“Some time in the fall of 1951 a professional Ampex tape recorder arrived to the Department of Music at Columbia University. For several weeks it sat in an imposing packing box under one of the tables without revealing its potential threat to invade the traditional assumption that music is conceived in terms of musical instruments and that composer’s obligation ends with presenting a performer or a group of performers with a score which accurately represents his composition. A tape-recorder was, after all, a device to reproduce music, and not to assist in creating it. Having been bought at my instigation to serve in this intended function, it awaited my pleasure to be unpacked. Little did I know that opening the lid of the packing box produced an effect akin to that of Pandora’s box. Having been asked on several occasions to describe the effects of this unsettling experience on my creative life (my wife could tell a lot, if asked, on how it felt to live in a company of three tape recorders in a living room) I find it best in this particular instance to restrict myself to a recounting in a most direct way the evolution of my approach to the opportunities to compose music directly in sound. I must insist that what I have done is music to me; it has been kindly received by a good many people whose opinion I respect.” —Vladimir Ussachevsky

Originally the Columbia-Princeton Electronic Music Center, the CMC is the oldest center for Electroacoustic music in the United States. Following several years of experiments with electronic music composition at Columbia, the center was founded by Vladimir Ussachevsky (1911-1990) and Otto Luening (1900-1996) with a grant from the Rockefeller Foundation in 1958. Ussachevsky served as director of the center from its inception until 1980, followed by Mario Davidovsky, who served as director from 1980 to 1994. Fred Lerdahl and Brad Garton became co-directors on the center in 1994; the center’s name was changed to the Columbia University Computer Music Center under the directorship of Brad Garton in 1996.

When the center was founded in 1958, the CPEMC featured four well-equipped tape studios for electronic composition, as well as the famed RCA Mark II Synthesizer, which is still housed at the CMC. Over the years, the center aquired other state-of-the art equipment of the time, including Buchlas, Serge synthesizers, as well as customized electronic equipment. Computer technology was also in use at the center through the 1970s and 80s, and its ever increasing importance was reflected in the center’s name change in the mid-1990s. For anecdotal insight into early computer-use at the center, refer to the recollections of Peter Mauzey, Virgil deCarvalho and Howard Eskin compiled by AcIS.